Three bear cubs were discovered on the streets of Tbilisi, one in a rubbish bin, after the city was severely flooded in June 2015.  The cubs, picked up by the authorities during the emergency relief operations were taken to Tbilisi Municipal Dog Shelter as there were no other facilities where they could go at the time.

After the floods, Caroline Yates, CEO of Mayhew,  accompanied by the Mayhew International veterinary team, visited Tbilisi and the shelter to provide veterinary training and emergency assistance for companion animals. It was at the shelter that Caroline saw the three cubs. They were being looked after by shelter staff; however, because the shelter is geared towards the short-term care of stray dogs, the accommodation was clearly not suitable for the bear cubs in the long term.

Caroline said, “When I visited the Tbilisi Municipal Dog Shelter and saw these poor bear cubs I knew that we had to help them and find them a more natural habitat at such a critical time in their young lives. Working with Georgia’s Ministry of the Environment & Natural Resources and Tbilisi’s Animal Monitoring Agency we did everything we could to secure their safe passage to Arcturos in Greece.”

We called on international wildlife charity the Born Free Foundation to step in and assist the three cubs. Born Free launched an appeal ‘Bear Me in Mind’, which raised money to ensure the care of the cubs at the Arcturos sanctuary.

Once the money had been raised and the paperwork was completed, a date of Friday 13 May was set for the bears to start their journey to freedom – a very lucky date for them! The bears were loaded into their individual travel crates, which are specially constructed leopard crates and were the ideal size for the cubs. At the crack of dawn on the day of departure, the bears were loaded onto a truck and travelled to Tbilisi International Airport ready for the specially chartered cargo plane that was arriving from Athens in Greece. The bears were accompanied throughout their transit by Born Free’s vet, Dr. John Knight, BVetMed, MRCVS, who continually monitored them to make sure they were comfortable and healthy. Loaded on the plane, the bears’ crates were secured and they fell asleep with the motion of the plane and the sound of the engines during the four hour flight.

When the bears arrived at Thessaloniki Airport in Greece, they were quickly loaded into a truck, kept open for maximum ventilation in the hot and humid weather, and promptly cleared through customs before they began the three hour drive to the Arcturos sanctuary by road, stopping for food and water breaks along the way. The bears were fed tomatoes, apples, bananas, bread, honey and nuts and given plenty of water. The bears seemed calm and happy during the journey and after a while the convoy left the city behind and the landscape changed to countryside, a wide valley and mountains. 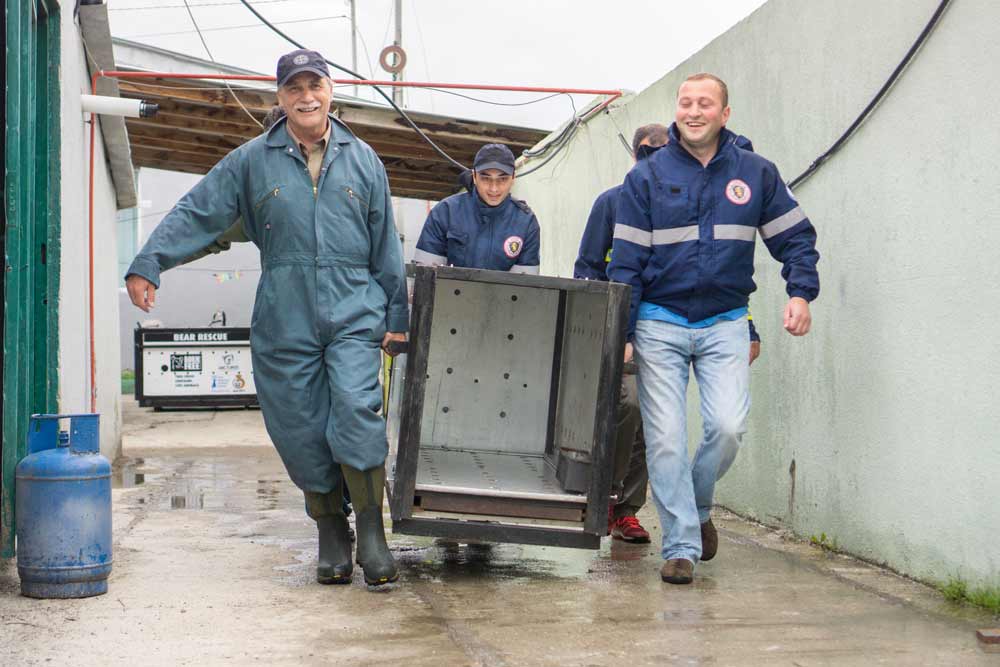 On arrival at Arcturos the bears were placed into holding dens so that they could get used to their new environment. Georgia came out first and immediately ran into the enclosure while Mayhew International, Born Free and Arcturos staff watched in anticipation. Mollie was next to be released into the enclosure followed by Louisa. All three bears were a little tentative and uncertain of what was going on, however they took to their new surroundings quickly. They were alert and curious looking up at the blue sky and bright sunshine, walking, running and sniffing around to explore. The  bears had been used to the barking of dogs in the Tblisi Municipal Dog Shelter so the sounds of the quiet and peaceful countryside and crickets filling the air was unfamiliar too.

After a couple of hours, they began to settle down and after spending their first night, the sanctuary staff reported that they were feeling much more comfortable in the morning and happily eating their food.

The bears are all doing really well and now happily living together in a large grassy enclosure with another bear cub, Patrick, who was already at the sanctuary. All four bears are getting along fine.  They are all comfortable and safe within their new enclosure which gives them an environment where they can be rehabilitated and released to live semi-wild as bears should and not be subjected to a life in captivity.