We received a lovely update from Nikos at Arcturos, the bear and wolf sanctuary in Northern Greece, where the three Georgian bears that we rescued have successfully settled into their new home. You can read the story of their rescue and journey to Greece here.

The three orphaned female bear cubs, Louisa, Mollie and Georgia, were discovered in the aftermath of the floods in Georgia’s capital, Tbilisi, in June 2015 and travelled 1700 miles to their new home at Arcturos sanctuary in May this year.  We are happy to report that they are all doing really well and are now released into a larger, meadow enclosure.

During the first few days of their release into their new enclosure, only Louisa was very playful and active and she would eagerly approach the feeding stations and the staff. She has also become very good friends with Patrick who is another orphaned cub at the sanctuary who was integrated successfully into the group so that they would all be living together. Happily Louisa and Patrick are now firm friends and are spending most of their day playing together, swimming and climbing trees. 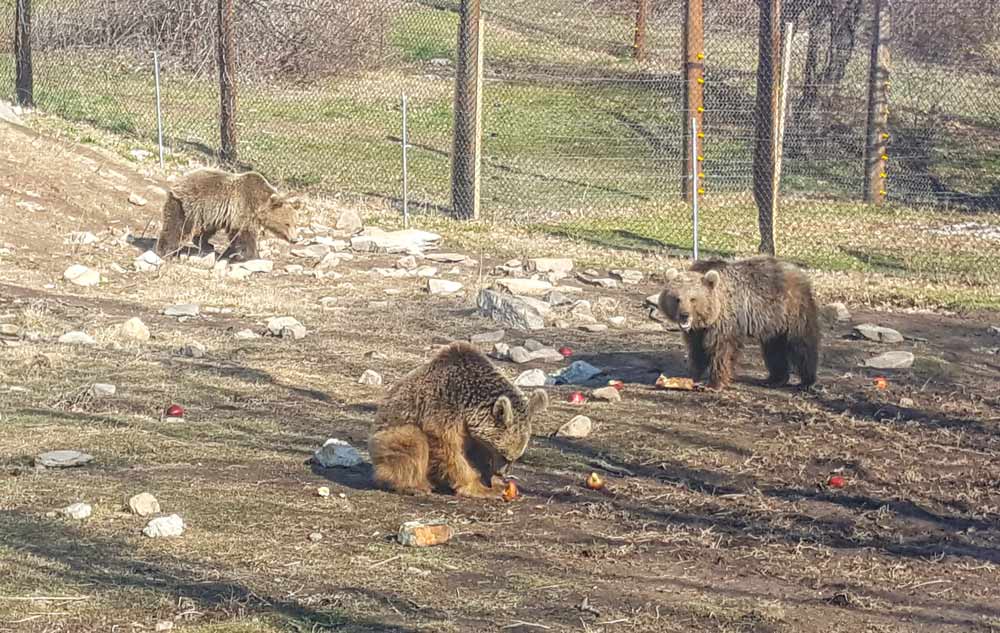 Initially Mollie and Georgia were more reserved and wary and spent their first days hiding in their dens and at first didn’t come out for food. However, very slowly, they became braver and came out for their food at night and gradually grew more assured and confident with their new surroundings.

All four bears are now happy and familiar with members of staff and their feeding spots. They come out together from their dens in the morning and eat a variety of foods including apples, water melons, melons, plums and bread. After eating they spend all of their day playing, swimming and climbing trees. It’s a bear’s life!

When it’s hot they prefer to stay in their dens for the day, coming out later in the afternoon when it is slightly cooler.  All four bears will remain in their new enclosure for the remainder of the year and the plan is that when they are ready they will be transferred to a new larger enclosure next Spring.

We launched an emergency appeal for the bears raising over £6800, and with our supporters’ generous donations we were able to look after the three bears for almost a year until they could be transferred from Georgia to Greece. The remainder of the funds amounting to £2500 has been given to Arcturos for the continued care of the three cubs.

Caroline Yates, CEO, says, “We are absolutely delighted to see Georgia, Mollie and Louisa looking so healthy and happy in their new home and enclosure. Our generous supporters not only helped to look after the orphaned cubs in Georgia for almost one year, they are also helping with the bears’ ongoing care at Arcturos in Greece.  We would also like to thank Nikos and all the staff at Arcturos for their dedicated work to care for the bears including Patrick who has integrated with them so well.”